How Trustworthy Is Eyewitness Testimony In Court? 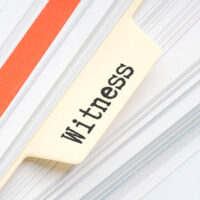 If you are facing criminal charges and eyewitness testimony is central to your prosecution, you may be very concerned about the possibility of a conviction.  After all, someone who may seem to be an upstanding member of the community claims to have seen you commit a crime.  What chance could you possibly have against an eyewitness account?  While any criminal charge is serious business and witness testimony against you is never a good thing, the fact is that eyewitness testimony may not be as iron-clad as you thought.  A good defense attorney knows that there is a lot of research debunking the reliability of such testimony.

Can Eyewitness Testimony be Trusted?

A number of studies over multiple decades have found that the accuracy of eyewitness testimony in criminal trials leaves a lot to be desired.  Even the most confident of witnesses makes mistakes, and that’s simply the nature of memory in human beings.  To be sure, visual perceptions combined with erroneous memories unite to make this eyewitness testimony one of the very least reliable forms of evidence!  In fact, a predominant number of wrongful convictions—later proven to be erroneous through DNA and other evidence—have been based largely on faulty eyewitness testimony.  In one study, researchers discovered that over 70 percent of overturned convictions were originally based on eyewitness testimony, and in over 30 percent of those cases, there were multiple eyewitnesses whose testimony was demonstrably wrong.

The Problem with Memory

Although many of us may think that memory is like a video recording, this is miles away from the truth.  Remembering, according to noted researchers, is more analogous to putting puzzle pieces together.  When a witness is questioned by police or lawyers, bits of actual memories may be unwittingly commingled to the questioner’s words and information, leading to inaccurate recollections. Multiple other factors can impact memory, including:

One study looked at memory errors and the certainty with which subjects held to their faulty recollections. Subjects were given three true narratives and one false one about events that had occurred in their lives.  Relatives provided details for the false story in order to make it more realistic.  Over 30 percent of subjects claimed the false event had really occurred, despite it being complete fiction.  They genuinely believed that they remembered an event that had never actually occurred.

The truth is, most witnesses have no motivation to wrongly identify someone in court; they are simply trusting an inaccurate memory.  At Lobo Law, our Las Vegas criminal lawyers are all too familiar with the impact that such testimony can have on a jury, and we are prepared to challenge it with full force.  To discuss your criminal case, schedule a confidential consultation in our office today.