Can Law Enforcement Enter Your Home Without A Warrant In Certain Situations? The Supreme Court Debates the Question 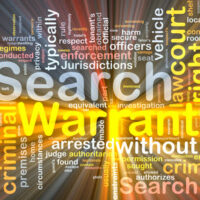 Does the Fourth Amendment prohibit police from entering our homes without a warrant? Most people would state that the answer is an unequivocal “yes.” The fact of the matter is that the Supreme Court is currently considering the question, so perhaps things aren’t as cut and dried as we all assume.  What seems to many a certainty is actually an open question at the moment.

As with most things, the issue is more complicated than it appears at first glance.  The Supreme Court is weighing the issues based on an episode involving Edward Caniglia back in 2015.  According to court documents, Edward, in a state of distress, handed his long-time wife, Kim, an unloaded gun and asked her to put him out of his misery.  The couple argued, and eventually Mrs. Caniglia packed an overnight bag and found a hotel room.  The following day, she called the local police department to request a wellness check on her husband, fearing he may have harmed himself.

Police interviewed Edward, and he confessed to being fed up with the constant arguing and said he was at the end of his rope. Although officers found him to be relatively compliant and composed, the ranking officer determined that there was an imminent danger of Edward hurting himself or others and had him taken by ambulance to the hospital in order to undergo a mental health evaluation.

While Edward claims that he only agreed to be hospitalized in exchange for a promise from police to leave his handguns in the home, police claimed there was no such agreement.  They in fact told Kim that her husband had consented to a search of the home and to surrender his guns. After seizing two handguns and associated ammunition, police noted that the weapons posed a clear danger to the couple, specifically, and to the neighborhood in general due to Edward’s mental state.

While all this was going on, Edward was evaluated by a psychiatrist, but was never admitted to the hospital.  Equally important, he was never charged with a crime or arrested.  Nonetheless, his guns were gone, and were not returned until months later, and he required a court order to get them.

How is the Court Thinking About This?

A number of issues are under discussion by the court:

As the Supreme Court deliberates the Caniglia case, issues relating to searches and seizures right here in Nevada affect Nevadans every day.  If you find yourself unsure of your rights in such a situation, the Las Vegas criminal defense lawyers at Lobo Law can help.  Schedule a confidential consultation with our office today.