Are K9s Allowed At Traffic Stops? 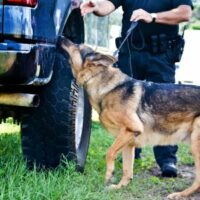 While it’s never pleasant to realize you are being pulled over by law enforcement, what could be more terrifying than having a police dog there participating in the incident?  Police may cite suspicion of drugs in your vehicle in order to justify the presence of dogs to sniff them out.  But you should be aware of your rights in these matters.

According to a case dating back to 1998, drug-sniffing dogs are allowed only to smell your car’s exterior if you are detained for some sort of traffic violation.  The case involved a gentleman by the name of Roy Caballes.  Caballes had been driving just 6 miles per hour above the posted limit when he was spotted by police.  He cooperated with the officer and provided requested information.  Because there was an air freshener in his vehicle, and because the officer believed he seemed nervous, police suspected drugs.  Drug sniffing dogs were brought to the car, where they were allowed to sniff the car, including inside the trunk, without Caballes’ permission.  A quarter million dollars’ worth of marijuana was discovered, and Caballes was charged and convicted of drug trafficking.  However, the State Supreme Court later threw out the conviction on the grounds that there had been no reasonable suspicion to justify the search.

The state court was later reversed by the Federal Supreme Court.  In his ruling, the one Justice said there was only minimal intrusion into the privacy of Caballes, and constitutional protections should not be invoked.  He reasoned that because the stop had been lawful, and because illegal materials were discovered, the Fourth Amendment was not violated.

Here in Nevada, the courts require law enforcement to have a warrant before using a dog to search a vehicle.  In fact, your trunk cannot be searched at all except under four specific circumstances:

When it comes to probable cause, having a canine alert to the scent of drugs may not actually indicate a crime.  That’s because dogs do not indicate which drugs or what amount of a drug they are detecting– and that’s problematic.  Probable cause becomes a lot murkier since recreational marijuana is legal in minimal quantities.  Officers won’t know if the dog is detecting a legal substance, or something else.

Have You Encountered a Drug Sniffing Dog?

If you have endured a search against your consent as a result of a K9 alert, there is a possibility that the search was not sanctioned by Nevada law.  To discuss the possibilities, contact the Las Vegas criminal defense lawyers at Lobo Law today.